Web address: www.vef.hr, (mostly about the institution, no info about the project)
www.life-vuk.hr (LIFE-WOLF project web site is regularly updated) 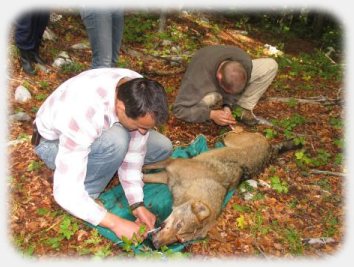 In Croatia, considerable efforts were invested to capture and collar new wolves, but it failed
this year. Supported with other data obtained by different means this lead to the conclusion of a
slight decline of wolf population in Croatia in the last two years. The estimate was 177 wolves
(compared to high of 230 in 2011). This finding lead to the important management decision not to
allow any hunting quota for wolves this year. So, the negative trapping result was also very
useful. Much work and many new results arose from the use of trap cameras (obtained with
UKWCT funds). On about 8000 (of over 50,000) pictures some animals were seen what gave a
new insight in predator and prey populations abundances. Part of genetic work was published in
cooperation with Italy and the cooperation with SloWolf project additionally helped to estimate
wolf population in Slovenia. The finding that only 35-40 wolves are in Slovenia also led to the
decision of no hunting quota in Slovenia this year as well. New findings on the likelihoods of
collisions with animals on the highway were obtained by modeling of habitat and other relevant
parameters. Published were 7 scientific papers and two reports (one on wolf and lynx each) in
Croatian language.

Further information about this project is available via the 2013 project report.

This article regarding Josip's work with European wolves in Croatia was published in Wolf Print issue 26.

In 2014 the UKWCT continues to fund the field work in Croatia.