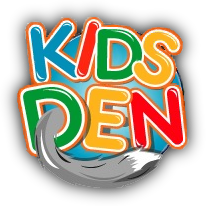 Wolves and their families

How do wolves live? 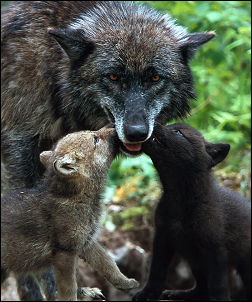 Wolves live in family groups called packs. In the wild a pack is usually made up of a mum and a dad and their cubs from the last couple of years. There are usually four to six cubs born together in a litter and these are known as litter mates. Their first home is usually a den, which can be a small cave or a hole dug in the ground, and they spend a lot of time there during the start of their lives. The den is often dug by the mother of the cubs during breeding season and she has to make it big enough for herself and her cubs to be comfortable in, yet small enough to keep in the warmth, as well as protect them from dangers like other animals who want to hurt them. You can often see the wolves at the Trust digging their dens around breeding season!

The cubs grow inside their mum for about 63 days before they are born. At birth, they weigh only around 450 grams and their eyes are closed. They grow quickly and about ten to fourteen days after they are born, they open their eyes. By three weeks of age they can walk around and about a week after that, they may come out of the den for the first time. At first, they live only on milk from their mum but by three weeks of age, they start eating meat. Since the cubs are too young to hunt, adult wolves bring meat to them in their stomachs. The cubs lick around the mouth of the adults when they return from the hunt they regurgitate the food for the pups. They do this because not only is it an easy way for them to carry food to the cubs, it also helps them as the food is already chewed and slightly digested.

How does a pack work together?
All the wolves in a pack help take care of the young. Pack members bring food to mum so she does not have to leave the den. Later when the cubs are bigger pack members take turns bringing them food, playing with them and even baby-sitting. Once they are about eight weeks old, the adults leave the den site and take them to rendezvous sites. In these open areas, the wolves gather to sleep, play, eat and just hang out. Until the cubs are old enough to go and hunt with the adults, they stay at a rendezvous site with one of the adult wolves to take care of them.

Wolf cubs love to play with their older brothers and sisters, stalking and pouncing on each other. This type of play will help them all their lives, as it is practice for stalking and killing prey and learning the social interactions of the pack. Cubs will also play with "toys" like bones, feathers or the skins of dead animals. They "kill" the toys over and over again and carry them around as trophies. As they get larger, they will use the skills they learned from this play as they begin to hunt small animals, like rabbits. When they are around six months old, they will start hunting larger animals with the rest of the pack.

How does a wolf pack form?
A wild wolf pack is a family group founded by two wolves, a male and female. These two wolves are the offspring wolves of another pack that have reached maturity and then dispersed to begin their own lives. It is the most dominant wolves (usually the strongest and bravest) that mate and have children, and both these wolves mate for life, only choosing another mate if their current one dies. The reason only the most dominant wolves mate is that these cubs have the best chance of survival as the whole pack will protect them, and this way only the strongest and bravest wolves pass on their genetics. As these cubs mature they will eventually disperse and leave their birth pack to try and start one of their own like their parents did before them.